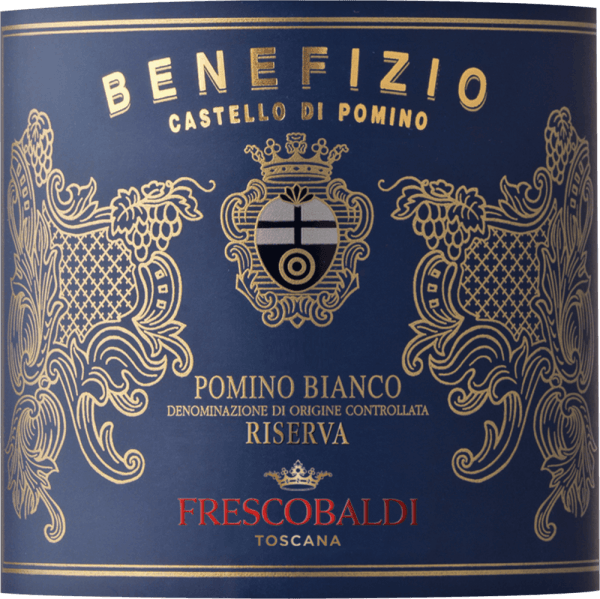 The Pomino Benefizio Riserva DOC by Castello Pomino is a cru of the Frescobaldi family in Pomino in the area of Rùfina. The Pomino Benefizio Riserva shines intensely yellow with very beautiful golden reflections in the glass. The nose reveals the typical notes of citrus fruits of Chardonnay, in particular pink grapefruit and lemon zester jam, accompanied by notes of white flowers, delicate aromas of vanilla and cinnamon, as well as elegant toasted notes. On the palate, this appealing Tuscan white wine is pleasantly fresh, spicy, full-bodied and round. The long finish is reminiscent of white chocolate and creamy mousse.

The Cru Pomino Benefizio Riserva is made from Chardonnay grapes that grow on a single vineyard, a monopoly of the Frescobaldi family at an altitude of 700 metres above sea level. This vineyard was planted exclusively with Chardonnay in 1976 and has been making history ever since. The Pomino Benefizio has been Riserva since 2005.
After harvesting, the grapes were partially fermented at low temperatures for 12 hours, followed by malolactic fermentation for the most part. The wine ages for 10 months in barriques and finishes maturing with a further 4 months in bottle.
The result is a silky smooth wine with an outstanding personality.

Enjoy this white riserva from the north of Tuscany with vegetable cream soups, oven-dried dorade, salmon baked in foil or caviar. It is also a pleasure when drunk alone.