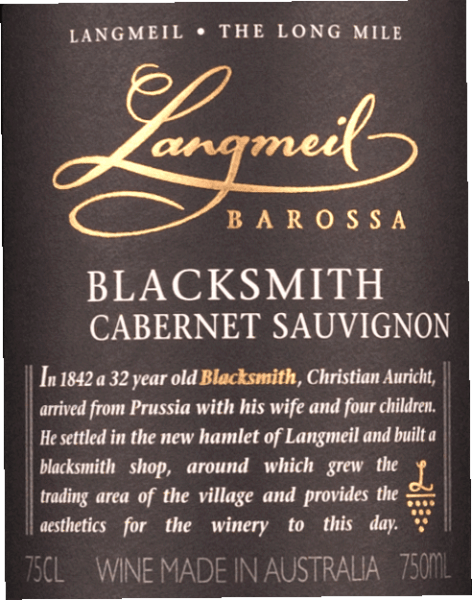 The powerful Blacksmith Cabernet Sauvignon Barossa Valley from the pen of Langmeil shimmers into the glass with a dense crimson. After the first swirl, this red wine reveals a high density and fullness, which can be seen in strong stained glass windows at the edge of the glass. The nose of this red wine from South Australia seduces with nuances of black cherry, black currant, mulberry and plum. Continuing to explore the aromas, the influence of oak adds oriental spices and black tea.

This red by Langmeil is just the right thing for all wine connoisseurs who like as little residual sweetness in the wine as possible. However, it is never sparse or brittle, as you would expect from a wine above the 5-Euro mark. This velvety and dense red wine is full of pressure and facets on the palate. With its vital fruit acidity, the Blacksmith Cabernet Sauvignon Barossa Valley presents itself wonderfully fresh and lively on the palate. The finale of this red wine from the South Australian wine-growing region, more precisely from Barossa, finally captivates with a remarkable aftertaste.

Vinification of the Blacksmith Cabernet Sauvignon Barossa Valley by Langmeil

This powerful red wine from Australia is made from the Cabernet Sauvignon grape variety. Clearly, Blacksmith Cabernet Sauvignon Barossa Valley is also determined by climatic and stylistic factors of Barossa. This Australian can be described in the best sense of the word as a wine of the New World, which is exceptionally impressive. When they are perfectly ripe, the grapes for Blacksmith Cabernet Sauvignon Barossa Valley are harvested exclusively by hand without the help of coarse and less selective harvesters. After harvesting, the grapes are immediately taken to the winery. Here they are sorted and carefully broken up. Fermentation follows in small wood at controlled temperatures. The fermentation is followed by a 24-month ageing in French oak barrels.

This Australian red wine is best enjoyed at a temperature of 15 - 18°C. It goes perfectly as an accompanying wine with roasted calf's liver with apples, onions and balsamic vinegar sauce, noodles with sausage balls or chickpea curry.