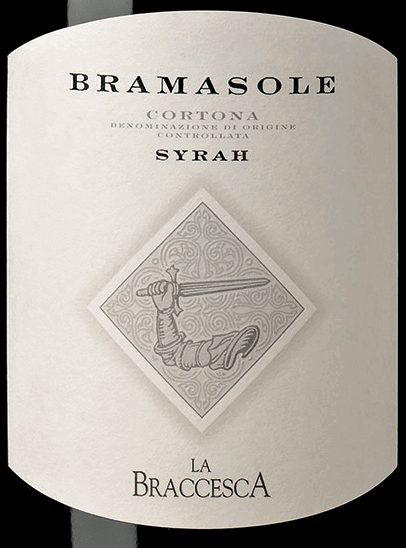 The Bramasole Syrah Cortona DOC from La Braccesca presents itself intensely ruby red in the glass. On the nose it surprises with aromas of ripe red berries and a good balance of spices and tobacco. On the palate, this magnificent red wine opens up its full potential with an abundance of impressions, complex aromas, structured character, rich, fruity, balanced body. The finish is very long, persistent and soft.

With this wine from 100% Syrah the potential of this terroir is shown once more. Here the Syrah feels well on clayey, barren, dry soils at the foot of the hill of Cortona. The Syrah grapes for Bramasole come from the vineyard's sunniest location. A wine that develops over time and tells the story of a new grape variety in an old and traditional wine-growing region.

After selective manual grape harvesting, destemming and gentle pressing, the must is transferred to stainless steel tanks for alcoholic fermentation. The maceration on the skins takes place first at low temperatures in order to extract the aromatic components in the best possible way, then at a controlled temperature of 28°C in order to obtain tannins and colour. The wine is left on the skins for about 20 days before being transferred into French barriques new and used in a second run for malolactic fermentation. This is followed by maturation in barriques for 18 months and, after bottling, in the second spring after the harvest, and further maturation in the bottle for 14 months. Only then is the Bramasole ready for sale.

The Bramasole has a storage potential of approx. 10 years. It is recommended to open it 2 hours before serving.

A powerful, elegant wine from Tuscany that is a perfect accompaniment for tasty and spicy dishes with red meat and game, spicy vegetable dishes, mature cheeses.

Awards for the Bramasole Syrah Cortona DOC from La Braccesca