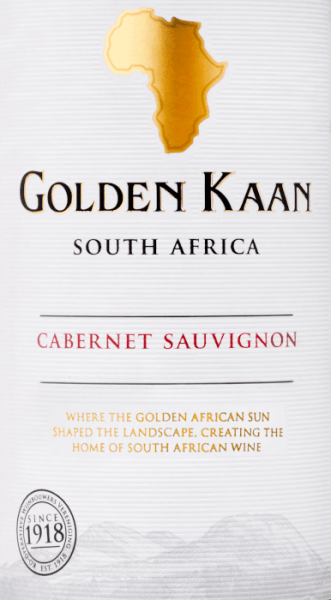 With the Golden Kaan Cabernet Sauvignon, a first-class red wine is added to the waved glass. In this it reveals a wonderfully dense, purple-red colour. The first nose of Cabernet Sauvignon presents notes of lavender, plums and blueberries. The fruity components of the bouquet are joined by notes of barrel ageing and even more fruity-balsamic nuances.

The Cabernet Sauvignon from Golden Kaan is the right choice for all connoisseurs who like as little sweetness in the wine as possible. However, it is never sparse or brittle, which is absolutely not a matter of course for an entry-level wine. On the tongue, this powerful red wine is characterised by an incredibly crisp texture. With its lively fruit acidity, the Cabernet Sauvignon is impressively fresh and lively on the palate. The finale of this red wine from the Western Cape wine growing region, more precisely the Western Cape, finally inspires with a good aftertaste.

This powerful red wine from South Africa is made from the Cabernet Sauvignon grape variety. After the manual harvest, the grapes are immediately taken to the press house. Here they are selected and carefully ground. This is followed by fermentation in large wood at controlled temperatures. The vinification is followed by a maturation of 9 months in French oak barrels.

Food recommendation for the Cabernet Sauvignon of Golden Kaan

as an accompaniment to stuffed peppers, goose breast with ginger red cabbage and marjoram or vegetable couscous with beef burgers

Awards for the Cabernet Sauvignon from Golden Kaan

In addition to a first-class price-consumption ratio, this red wine from Golden Kaan also has a number of awards to its credit. In detail these are