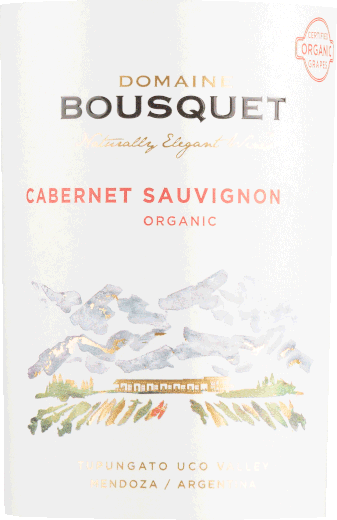 The powerful Cabernet Sauvignon Tupungato by Domaine Bousquet glides into the glass with a dense crimson color. With a little bit of side layering, the Bordeaux glass reveals a charming shade of violet at the edges. Ideally poured into a Bordeaux glass, this red wine from the New World presents wonderfully complex aromas of black cherry, plum, blackcurrant and plum, rounded off by vanilla, sun-warm stone and cinnamon, which the ageing in wooden barrels contributes.

This dry red wine by Domaine Bousquet is perfect for wine lovers who like it absolutely dry. The Cabernet Sauvignon Tupungato comes very close to this, as it was vinified with just 3.1 grams of residual sugar. On the tongue, this powerful red wine is characterized by an incredibly dense and velvety texture. The Cabernet Sauvignon Tupungato Bio shows itself on the palate through its vital fruit acidity, fantastically fresh and lively. In the finish this very storable red wine from the wine growing region Mendoza finally inspires with considerable length. Once again there are hints of morello cherry and plum.

This Argentinean red wine is best enjoyed at a temperature of 15 - 18°C. It is perfect as an accompaniment to vegetable couscous with beef rissoles, rocket penne or roasted calf's liver with apples, onions and balsamic vinegar sauce.

Awards for the Cabernet Sauvignon Tupungato by Domaine Bousquet

In addition to a very good price-performance ratio, this Domaine Bousquet wine has also received awards and top ratings beyond 90 points. In detail these are