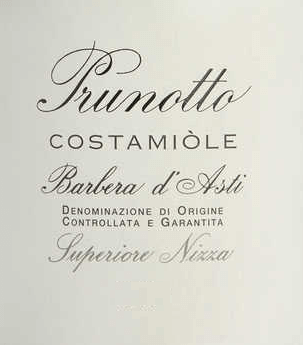 The Costamìole Barbera d'Asti Superiore Nizza DOCG from Prunotto is a delicious Cru from Piedmont. In the glass the Costamìole Barbera shines in deep dark garnet and ruby red with violet and black reflections. The nose is rich and fruity, with notes of plum and cherry, violets, cinnamon, cocoa and leather. On the palate, the Costamìole is captivating, pleasantly dense and rich in soft but well-structured complex tannins. The Bangang is long, full of spice and persistence.

In the area of Agliano, about 19 km from Asti, between Nizza Monferrato and Tiglione, there are 27 ha of vineyards with Barbera d'Asti, for the wines Costamìole and Fiulot. The climate is slightly warmer than in the Alba region, but the soils are similar in composition to the marl soils of Barolo in some places. This vineyard produces fresh and young wines, but also wines with ageing potential. Typical for the Barbera of Costamìole are the aromas of ripe cherries, plums, blackberries and raspberries, as well as the garnet red colour.
After destemming and pressing, the grapes are macerated at controlled temperatures on the skins, which are stirred in three times a day to obtain a higher extraction. The ageing in French oak barriques for 18 months is followed by a further 18 months in bottles.

The Costamìole Barbera d'Asti Superiore Nizza can be stored for at least 13 years.