Franz Haas - that is the name of a family and of 7 men who have built up and run the winery. The estate in South Tyrol produces wines with style, heart and a view to the future. 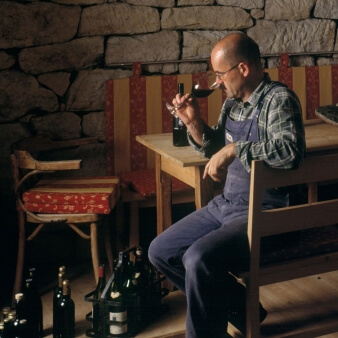 The Haas family has been running the winery since 1880, now in the 7th generation. The first son, who traditionally always bears Franz as his name, traditionally takes over the family business. It was Franz Haas VI, the father of the current owner, who first sold open wine to various producers with the help of a friendly wine dealer.

The current Franz Haas likes to experiment with the grape varieties, and so in his time he has already produced 592 different Pinot Neri, as this vine is particularly prone to disease and sensitive to climatic changes. He is assisted in this by Maria Luisa Manna, who runs the distribution network in Italy, and so Franz Haas was one of the first South Tyrolean wineries to sell in Italy, while the others concentrated on the German-speaking area. While in 1990 the team consisted of only three people, today this number has increased tenfold.

Due to climate change, Franz Haas now cultivates at altitudes of up to 1150 metres. Cultivation is not easy, but it is rewarded with special, unique characteristics of the wines from these vineyards, making the wine more aromatic, more structured, more spicy. An example of such a wine is the Pònkler Pinot Nero, whose vineyards deserve their name by the altitude of 800 m above sea level. The cooler air is very convenient for the Pinot Nero here, which is sensitive to heat.

Today the estate has 4 vineyards, the lowest one, Egna, starts at 245 m and reaches the highest one, Aldino.

20 different wines are produced at Franz Haas today, like

But also more unusual varieties like Lagrein, an autochthonous Tyrolean grape variety, are represented. Whether white, red or rosé, there is something for everyone. Special gems of the estate are the pure Pinot Nero sparkling wine Pas Dosè and the Grappa di Moscato Rosa.