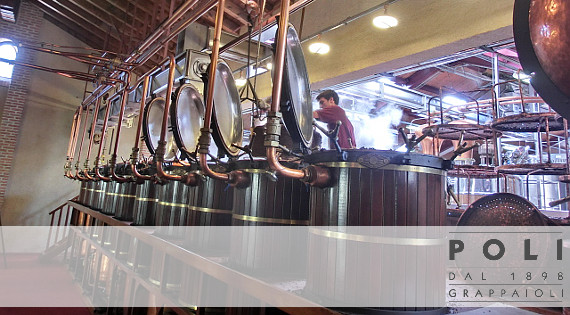 Poli produces mainly grappa or liqueurs obtained from grappa. Grappa, a clear grape marc brandy from Northern Italy, has found its home under the shadow of the mighty Monte Grappa. In the streets of Bassano del Grappa there are a lot of distilleries of Italian specialities. One might think that the fire borrowed its name from the city, but this is not the case. The art of distillation, brought to Europe by the Crusades, has been used since the Middle Ages by the winegrowers who transformed the residues of wine production - the marc - into aqua vitae or grape.

Among the distilleries in Italy, Poli has been represented in the top leagues for many years in terms of quality and reputation. Poli's success has several foundations, on the one hand the selection of the raw material, the best marc from the region around Bassano del Grappa and Breganze, as well as the old tradition of careful but not economical use of high quality products.

Thanks to improved production conditions and perfected distillery processes, the image of the grappa has been greatly improved. Until the middle of the 20th century, Grappa still had the reputation of being a drink for the poorest of the poor. This has changed considerably to this day and this is due not least to the efforts of Poli, who have been producing the Italian pomace brandy for more than 114 years.

The slogan goes back to Giovanni Battaista Poli, the son of the company's founder Giovanni Battaista Poli, who improved the quality of the Poli marc fires enormously by means of a modified steam boiler. While the competition at that time served the distillation flasks filled with pomace with direct firing, his method was not only much safer, but also ensured an increase in quality and a better influence on the desired result.

While GioBatta Poli was still a part-time grappaioli and mainly engaged in the production of straw headgear, his son Giovanni was able to establish the success of the family business thanks to the machine he designed. With Toni Poli, the company entered its third generation. Thanks to his ambitious father, he was able to explore the world and expand his knowledge with flavours. Every product of the family-run company has a little bit of adventure to offer. Poli's production plant, which is in use today, dates back to Jacopo Poli's father. It was built at the end of the 1950s and further refined distillation and storage. Jacopo Poli and his brothers and sisters continue to run the distillery in the 4th generation and are constantly expanding their range of products. Now the following spirits belong to the rich portfolio of the family business:

In addition to the distillery, Poli has also felt obliged to bring the centuries-old history of grappa closer to a wide range of tourists and enthusiasts. The Museo della Grappa is located directly at the picturesque wooden bridge in the old town of Bassano del Grappa. Here you can follow the history of grappa and its development into a cult drink in a pleasant environment.

Jacopo Poli's passion for pomace brandy is reflected not only in the enthusiasm he has for the drink, but also in the fact that he tries to reinvent it rising. He achieves this not only by constantly fiddling with the distillation process so that everyone can find their favourite grappa, but also by showing that his products can be a sought-after basic product for bartenders and mixers worldwide. On the company website you can browse through dozens of creative cocktail recipes on a grappa basis and you are sure to find something for the next cocktail party. Here you can learn more about Poli's recipes with the grappas.

The energy and tradition of the company's director is not in vain, as can be seen from the wealth of awards that Poli's products have received on a large scale at various trade fairs and tastings.