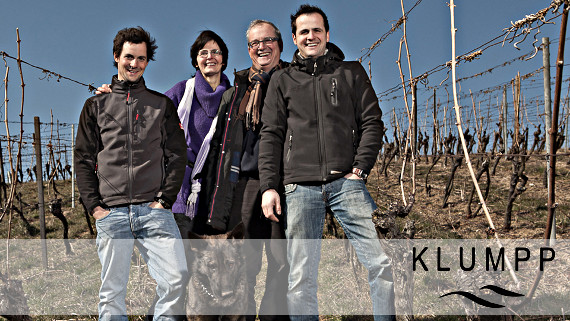 Bruchsal is located between Heidelberg and Karlsruhe and thus in the middle of North Baden. Here there was a small wine-growing farm with 1.2 hectares of vineyards, where Ulrich Klumpp grew up and discovered his love for winegrowing. Consequently, he gradually acquired more wine growing land and founded the Klumpp winery together with his wife Marietta in 1983 on 4.5 hectares of land. Gradually the area of the vineyard increases, so that the winery can now proudly look back on 25 hectares of organic cultivation, for which the winery was awarded the regional honorary prize for Kraichgau in 1997 and 1998 and the regional environmental prize for Kraichgau in 2002.

Rosé, white and red wines are produced from traditional grapes such as Pinot Gris, Riesling and Pinot Noir. a Pinot Noir from an old cultivation. The oldest vine is the Auxerrois from 1965, and all wines are classified according to the French model in vineyards, so that the choice of wine is no longer so difficult.

With the exception of the "Blanc" and "Rosé", all the wines of the Klumpp Winery are vegan.

More information about the North Baden winery can be found here: Weingut Klumpp

Filter
No results were found for the filter!
organic-dynamic