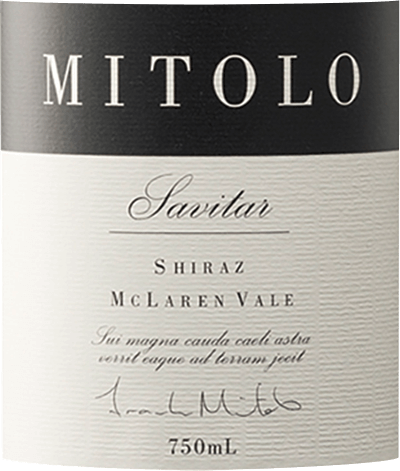 The powerful Savitar Shiraz McLaren Vale from Mitolo Wines comes in a dense crimson glass. With a little bit of side layering, the Bordeaux glass reveals a charming garnet-red tone at the edges. This single-variety Australian wine presents in the glass wonderfully elegant and complex notes of plums, morello cherries, black cherries and plums. These are joined by hints of sun-warm rock, vanilla and black tea.

This dry red wine from Mitolo Wines is perfect for wine drinkers who would like to have 0.0 gram residual sugar in their wine. On the tongue, this powerful red wine is characterised by an immensely dense texture. With its lively fruit acidity, Savitar Shiraz McLaren Vale is impressively fresh and lively on the palate. In the finish this very storable red wine from the wine growing region South Australia finally inspires with considerable length. There are again hints of morello cherry and plum. In the aftertaste mineral notes of the soils dominated by sandstone and clay are added.

Vinification of the Savitar Shiraz McLaren Vale from Mitolo Wines

This red wine clearly focuses on one grape variety, namely Syrah. For this wonderfully powerful, varietal wine from Mitolo Wines, only first-class grapes were used. The grapes grow under optimal conditions in South Australia. The vines here dig their roots deep into soils of clay, sandstone and loam. After the manual harvest, the grapes are immediately transported to the winery. Here they are selected and carefully ground. The fermentation is followed by a maturation of 18 months in new wood from French oak.

This red wine from Australia is best enjoyed at a temperature of 15 - 18°C. It is a perfect accompaniment to goose breast with ginger red cabbage and marjoram, leek tortilla or boeuf bourguignon.

Awards for the Savitar Shiraz McLaren Vale from Mitolo Wines

This wine from South Australia does not only convince us, no, also well-known critics awarded it with 90 points and more. Among the ratings are