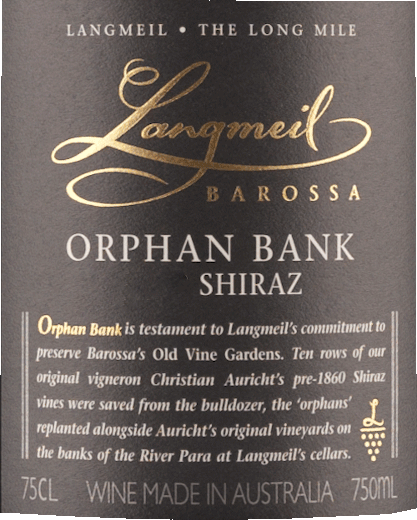 With the Langmeil Orphan Bank Shiraz Barossa Valley a first-class red wine comes into the glass. Here it reveals a wonderfully dense, purple-red colour. The first nose of Orphan Bank Shiraz Barossa Valley flatters with notes of blackberries, plums and blueberries. The fruity components of the bouquet are joined by barrel ageing notes of dark chocolate, vanilla and cinnamon.

The Orphan Bank Shiraz Barossa Valley by Langmeil is the right wine for all wine lovers who like as little sweetness in their wine as possible. However, it is never sparse or brittle, as you would expect from a wine at a higher price. This dense, velvety and powerful red wine is full of pressure and facets on the palate. With its lively fruit acidity, the Orphan Bank Shiraz Barossa Valley is wonderfully fresh and lively on the palate. In the finish, this red wine from the wine growing region of South Australia, which can be stored well, finally inspires with its extraordinary length. There are again hints of blueberry and plum.

Vinification of the Orphan Bank Shiraz Barossa Valley by Langmeil

The powerful Orphan Bank Shiraz Barossa Valley from Australia is a pure wine, pressed from the Syrah grape variety. After the manual harvest, the grapes reach the press house as quickly as possible. Here they are selected and carefully broken down. This is followed by fermentation in small wood at controlled temperatures. The fermentation is followed by a maturation of 24 months in French oak barrels.

This red wine from Australia is best enjoyed tempered at 15 - 18°C as an accompaniment to vegetable couscous with beef rissoles, lamb stew with chick peas and dried figs or cod with cucumber-mustard vegetables.