A proud bull decorates the bottles, the Solera process is at home here and the Osborne family is still producing first class sherry, brandy and wine today.

El Puerto de Santa María in the Sherry Triangle owes its reputation in part to the British merchant Thomas Osborne, who, with his export business founded in 1772, created a brand that is known and loved worldwide.

For more than 200 years Osborne stands for high-quality brandies and spirits. Throughout its history, the company has expanded steadily, first with the production of brandies and later with investments in the Montecillo and Malpica wineries. The great popularity of Osborne Sherry experienced a real boom on the Spanish market, which did not even stop at England and the United States of America. Today Osborne, with the Toro de Osborne, represents the first-class brandy from Spain and offers a wide range of products to suit every taste. 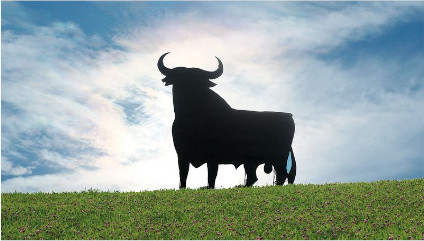 The family business, now in its 8th generation, employs more than 900 people worldwide and sells its products in 40 countries. The trademark of the manufacturer is a bull. Designed in 1956, this catchy symbol embodies the temperament, expressiveness and character of Osborne products. A total of 90 steel Osborne bulls, which have been listed as essential parts of the Spanish landscape since 1997, now adorn Spain's highways and mark important points in the local landscape.

The world famous Osborne spirits come from the company's own vineyards, which are planted with Palomino Fino and Perdo Ximénez grapes. Although the ingredients are always the same, the family business has the experience to produce sherry and brandy in a wide variety of flavors, from dry to extremely sweet. The flagship, the Brandy de Jerez, goes through the Solera process after distillation in copper kettles and column distillers. This system is fundamentally different from the processes used in other countries.

In the Solera process at the Osborne distillery, barrels of different vintages are stacked on top of each other in a pyramid. The base is made up of older vintages, the topmost cask of the youngest. Approximately one third of the content is removed from the barrels beforehand. Gradually, the youngest barrel is filled into the barrels below and blended with the older rum. As the brandy continues to mature in this new cask, a piece of the previous content moves to the cask level below, so that in the end a blend of different vintages is created. Therefore, it is not possible to conclude an exact vintage from the Osborne Brandy from the Solera process.

Osborne's variety of spirits included Brandy de Jerez, amber sherry specialties and wine. Some classics among them are: