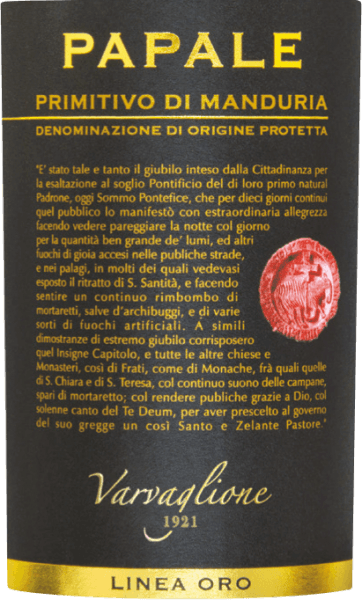 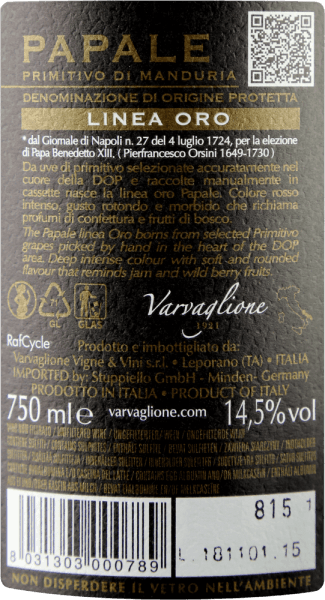 The Papale Linea Oro Primitivo di Manduria by Varvaglione is one tick bigger, denser and more concentrated than its little brother - the classic Papale Primitivo. This complex red wine of Apulian Prägiung shows itself with a dense ruby red and an almost black, purple-red core in the glass.

On the palate, the Papale Linea Oro (the golden line of the Papal wine) is wonderfully round, full and silky. The fine fruit sweetness, together with soft tannins, makes for a very special kind of red wine enjoyment.

For her Papale flagship, Varvaglione uses only grapes from very old vines. After the harvest, the grapes are destemmed and the berries crushed. Fermentation takes place at 26-28°C in stainless steel. After the subsequent biological acidification, the Papale Linea Oro is matured in French oak barrels and American oak barriques for at least 10 months.

The Papale wine series was launched on the occasion of the 90th anniversary of Varvaglione, which was celebrated in 2012. The "papal" wine was named after the vineyard on which the grapes for Papale Primitivo grow, which once belonged to the family of Pope Benedict XIII.

Enjoy this exquisite primitivo of old vines with strong and pink spicy meat dishes such as Moroccan tajine with lamb, courgettes and dates or with grilled entrecôte or lamb salmon. 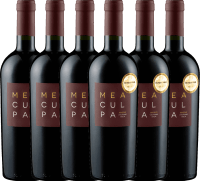