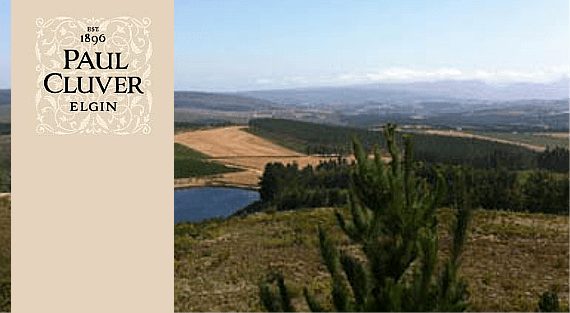 When Paul Cluver, a neurosurgeon by training, bottled his first wine in 1997 in Elgin, 70 km south-east of Cape Town, he was ridiculed for his plans to grow wine in the immediate vicinity of the cool Atlantic Ocean.

Up to that time, he was the only one who recognized the potential of the wine heritage declared by UNESCO, which promised Elgin as a wine region. In this highland region, the climate and vegetation are changing and Elgin is actually known for apple and peach cultivation. Paul Cluver deliberately planted grape varieties that were appropriate to this harsher climate. So it didn't take long for the critical voices to fall silent and the sophisticated and elegant Cluver wines were not only proverbial on everyone's lips.

Innovations that pay off

Today, more than a decade later, the region has experienced an enormous upswing and Paul Cluver, now strengthened by his son and wife Alexandra, is the spearhead of a number of winegrowers who are increasingly able to express the peculiarity of the Elgin in their wines. This is also shown by the numerous awards for the winery, of which John Platter says:"Paul Cluver has long since arrived in the hall of fame of the world of wine" and the wine industry reports:"Paul Cluver is one of the best producers in South Africa for all four varieties".

Filter
No results were found for the filter!
vegan