Wichtige Eckdaten
Close menu
Description More information
Description
The Quercegobbe Toscana IGT by Petra is concentrated ruby red in the glass. On the nose, it has... more
Close menu

The Quercegobbe Toscana IGT by Petra is concentrated ruby red in the glass. On the nose, it has a wide variety of very appealing aromas, initially fruity notes of blueberry jam, dried raspberries, syrup cherries, dried plums, followed by plant notes of myrtle, rosemary, as well as notes of liquorice, cinnamon and pepper. On the palate, it impresses with its dense body, richness and powerful elegance, soft with round tannins, velvety and balanced freshness. Lingeringly long, intense and in tune with the aromas on the nose.

Vinification of the Quercegobbe Toscana IGT by Petra

This Maremma cru bears the name of the vineyard on which the Merlot grapes grow, from which it is vinified. The Quercegobbe vineyard in the Val di Cornia offers ideal conditions for Merlot, slightly hilly and climatic in a well-ventilated area. The clayey soils are very similar to those of the French Pomerol cultivation area, and rich in manganese and other minerals that have reached it through erosion processes from the surrounding hills. The vineyard was established in 1997 and is located in the immediate vicinity of the wine cellar. This is a particularly favourable situation, as it is the favourite wine of the winegrower Francesca Moretti.

The grapes are harvested in the early morning hours and then fermented in special conical oak barrels at controlled temperature. The wine is then aged for 18 months in 600 hl half-piece barrels, 30% of which are new, and a small part in barriques for second use. The wine matures for another 18 months in the bottle before it is sold.

Food pairing for the Quercegobbe Toscana IGT by Petra

Tip: To reach its full potential this Merlot should be opened one hour before drinking.

Awards for the Quercegobbe Toscana IGT by Petra 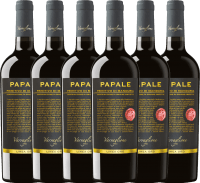