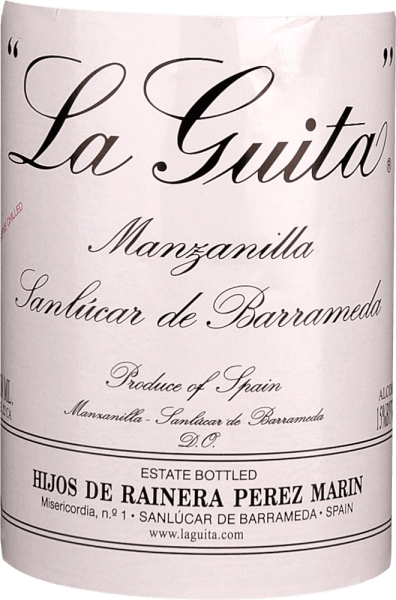 La Guita Manzanilla comes from the fishing town of Sanlucur de Barrameda in the flamenco region of Andalusia. This single-varietal sherry, vinified from Palomino Fino, matured in concrete barrels before being aged for 4 to 5 years in the Solera system. The result is an elegant and fresh premium sherry with a bouquet of apple aromas. A soft and salty sea breeze, mirabelle plums, pears and a fine touch of green almonds complete the nose of La Guita Manzanilla.

On the palate La Guita Manzanilla starts out wonderfully fresh, spicy and carried by fine yeast notes. In the finale one enjoys subtle nuances by bitter almonds.

After fermentation, the base wine is raised to 15% vol. alcohol and then filled into the barrels of the solera. As one fifth of the wine is always left empty in these barrels, the creamy yeast typical of sherry quickly forms on the surface, which feeds on the alcohol. It covers the surface and prevents oxidation of the sherry. The result is a Fino or Manzanilla Sherry that delights with its freshness, delicate green bitter almond aroma and fine, salty sea breeze. By the way, La Guita is called "the string", which of course is also found on the bottle. The name was created by Domingo Pérez Marín, the founder of the house. He sold his coveted sherry only for cash - in Spanish colloquially "string".

Always serve La Guita well chilled with Spanish tapas of all kinds, such as Manchego cheese, Iberico ham, seafood or olives - but try the Manzanilla as a companion for a complete Andalusian menu!