Effervescence in a glass: Along with so-called ‘still wines’, sparkling wines are also produced in almost all wine growing regions in the world. Champagne, Sekt, Prosecco and others stand especially for the enjoyment of wine coupled with ‘joie de vivre’ and the celebration of life. Joy that is our pleasure at the Vinello online wine shop to pass on to you. 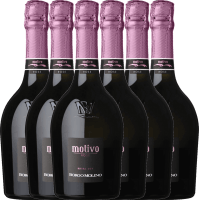 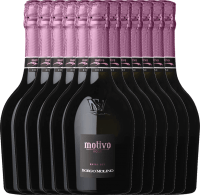 Leave any preconceptions you might have about sparkling wine behind! Sparkling wine has nothing to do with bubbly grape juice of questionable quality, as many consumers still believe. Even especially elegant wines, such as Champagne, Spumante or Cava are sparkling wines by definition. Food law simply defines it as all carbonated wine-based beverages with an alcohol content of at least 10 % and a pressure of at least 3 bar. How the carbon dioxide, which is responsible for the pressure in the bottle, is introduced to the wine is only of secondary interest for now. In principle, there are three basic methods used to produce sparkling wine:

Sparkling wines with the Champagne method

The traditional method for sparkling wine production was developed by the Benedictine monk Pierre Pérignon in the 17th century, however, according to current research, he did not actually invent it. Secondary fermentation, which is responsible for introducing carbon dioxide to the wine, takes place in the bottle. With the Champagne method, also known as méthode classique or méthode traditionelle, yeast and sugar (or unfermented must) are added to the base wine, which is then bottled and finally sealed. Once secondary alcohol fermentation begins, alcohol is produced along with the carbon dioxide that is responsible for the pressure in the bottle.

Following a minimum period of storage, the yeast in the bottle is gradually forced into the bottle neck by ‘riddling’. Finally the yeast sediment (lees) that has gathered is removed or ‘disgorged’, and the bottle is re-corked. Originally, the process was both precarious and laborious, which explains Champagne’s status as a luxury good. It was Dom Pérignon, by the way, that made the 0.7 litre bottle sociably acceptable: The amount was based upon the average consumption of one man during the course of a dinner at the time. The conventional larger bottles available today, such as the magnum (1.5 L), the Jeroboam (3 L) or even the extremely rare Melchizdek (30 L), have always been considered a status symbol of the haute volée.

With the transfer method, secondary fermentation also takes place inside the bottle. In contrast to the traditional method, the removal of the lees is less involved. It is simply filtered out, and the sparkling wine is the filled into new bottles. The loss of pressure that normally accompanies this method has been prevented with technical solutions since around the middle of the 20th century. Most German sparkling wine is produced with the transfer method.

Sparkling wines with the Charmat method

Along with the economic upswing and the increasing demand for sparkling wine, as well as new technical innovations in the 1950s, the Charmat method became interesting from an economic point of view. Secondary fermentation takes place in steel tanks, and the carbonised wine is then filtered and bottled under counterpressure. Sparkling wine production with the Charmat method is less labor-intensive than the traditional method and thus more economical.

One special type of the Charmat method is the Méthode rurale. Here, the carbon dioxide is produced during primary fermentation and brought to a halt with extreme cooling. The wine, which still has a high sugar concentration, is then bottled. Fermentation resumes, and carbon dioxide is produced. The final product is much sweeter than  sparkling wines  with secondary fermentation. The most well-known example is Asti spumanti, which is produced in large amounts in Piemont.

Sparkling wine with the Injection method

The injection method, also known as the soda method, is the least expensive way to produce sparkling wine: The base wine is simply cooled, and carbon dioxide is injected into it under pressure in much the same way as sodas are produced. The most well-known example for this method is Prosecco Frizzante, however because it has a pressure of under 3 bar, it is, strictly speaking, a pearl wine and not a true sparkling wine. High quality Prosecco spumante, in contrast, is usually made with the Charmat method, and has a finer and more stable perlage than Frizzante .

Sparkling Wines from around the World

In many parts of Europe, sparkling wines are made according to the methods described above. In Germany and Austria they are called ‘Sekt’ (Champage or Charmat Method), in France either Champagne (only if it actually comes from the Champagne region) or Crémant (Champagne or Charmat Method). In Italy the most well-known sparkling wines are Prosecco spumante (usually Charmatt Method) and Asti spumante. Cava, which must adhere to quality standards similar to those of Champagne, comes from Spain.