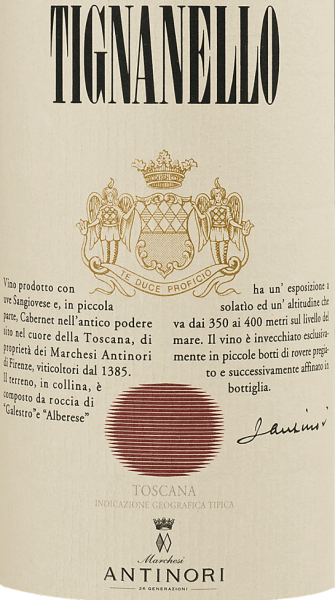 The Tignanello Toscana IGT by Marchesi Antinori is the flagship of the Antinori Tenuta Tignanello in Tuscany, practically a Premier Cru. This figurehead among the Supertuscans was produced with the vintage 1971 for the first time as Vino da Tavola, until today he inspires as an IGT wine lover in the whole world.

The Tignanello comes into the glass with a very intense ruby red colour. This top red wine enchants the nose with aromas of cassis, blackberries and other dark berries. Spicy nuances of chocolate, liquorice and spicy oakwood round off the bouquet of Tignanello. On the palate it is very powerful, engaging and vibrant. Everything is just right here - juicy fruit, great extraction without overloading, wonderfully present, silky and lively tannins that lend wines great complexity and a very long, lasting finish.

The Tignanello was first produced in 1970 as Cru, then still as Chianti Classico Riserva vigneto Tignanello, and according to Tuscan tradition also contained white grape varieties. As early as 1971 it was called Vino da Tavola and only Tignanello, the white grape varieties gradually disappeared completely. Since 1982, the Tignanello has continued to consist of Sangiovese 80%, Cabernet Sauvignon 15% and Cabernet Franc 5%. It is produced only in the best vintages.

The 2015 vintage was characterized by a particularly good and even ripening phase before the harvest, the grapes were completely healthy and ripe. After a very careful and selective picking, the grapes were selected again in the cellar to further optimize the quality. The grapes are vinified separately according to grape variety until the maturation in wood is completed. During the fermentation process in conical vats, the musts are carefully macerated, paying great attention to the freshness of the aromas, to the extraction of the pigments and to the extraction of the soft and gentle tannins. After precise and daily tastings, the wine is removed from the skins and placed in barriques, where malolactic fermentation begins, highlighting the fineness and complexity of the aromas. Now, in the same barriques of French and Hungarian oak, partly new, partly already used, the ageing for 14 to 16 months of the wines for the Tignanello begins. A few months before bottling, the cuvée is formed from the wines of the different grape varieties. A further 12 months in the bottle follow before the Tignanello comes onto the market.

Awards for the Tignanello Toscana IGT by Tenuta Tignanello