Antinori's Ode to the South of Italy

The winery Tormaresca in Apulia is the showcase winery of the Marchesi Antinori on the boot heel of Italy and a tribute to this ancient and wonderful wine-growing region, where wine has been produced since the ancient Greeks. Tormaresca is the only company in the region with vineyards in the two top wine-growing regions of Apulia. Two splendidly situated wineries, the Bocca di Lupo winery in the Murgia in the DOC Castel del Monte, and the Masseria Maìme winery in the Salento, not far from the sea, the lively heart of the Puglia wine-growing region.

Tormaresca - the Renaissance of a wine-growing region

For a long time Puglia was only known for quantity, but not for quality. Until a few years ago the largest grape producer in Italy, most of these grapes are exported to northern Italy and abroad to produce table wines. But this has been changing at a remarkable pace since the 1990s, the Puglia wine region is experiencing a real renaissance: modern wineries are being established everywhere, wine routes are running through the region, 25 DOCs are registered, autochthonous grape varieties such as Primitivo, Negroamaro, Fiano and Aglianico are receiving the recognition they deserve.

During a trip of Piero Antinori with the oenologist Renzo Cottarella at his side in the mid 90's, the decision was made to invest in this potential: wonderful grapes on a perfect terroir, but no infrastructure for the production of high quality wines. Since 1998, Tormaresca has been working to make this renaissance come true, to discover and promote autochthonous grape varieties and local culture, to produce quality wines, sustainable and ecological, with an enthusiasm for tradition, coupled with passion and a spirit of innovation. 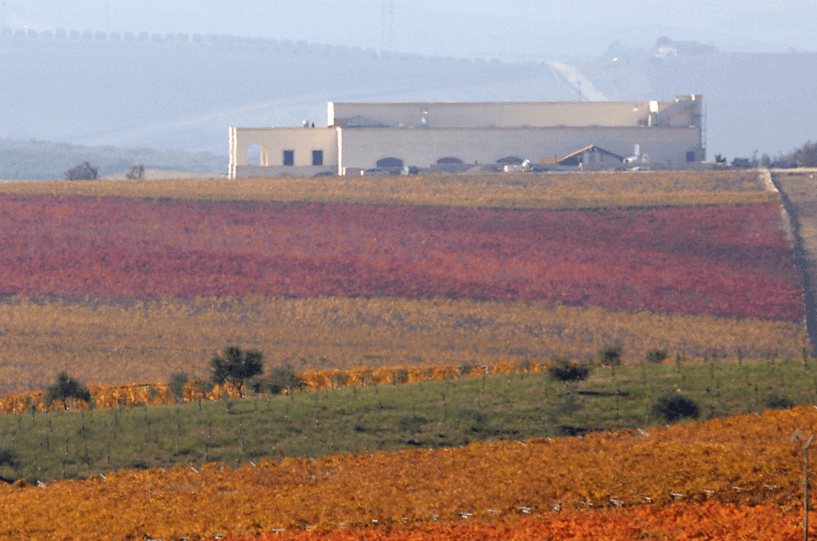 Tenuta Bocca di Lupo - the rediscovery of a unique terroir

The Bocca di Lupo winery with its 140 hectares near Minervino Murge in Apulia is located in the DOC Castel del Monte. The area is known for its beauty, its landscape and for Castel del Monte, the octagonal castle of the Hohenstaufen Emperor Frederick II and his passion for hunting. The vineyards grow at 300 m.a.s.l., harsh winters, strong temperature fluctuations, thick fog that sometimes cover the entire vineyards and the proximity to the Vulture volcano are just some of the challenges that make up this area. Chardonnay, Fiano Pugliese, Moscato Reale, Aglianico, Cabernet Sauvignon, Nero di Troia are cultivated here.
The white tuff manor house is built according to historical models, the underground wine cellar with a double barrel vault is also made of tuff and can hold up to 1000 oak barrels. From the terrace of the farmhouse you can enjoy a breathtaking view of the surrounding countryside, the nearby Minervino with its white stone houses and the Vulture volcano, which seems to watch over the plain. 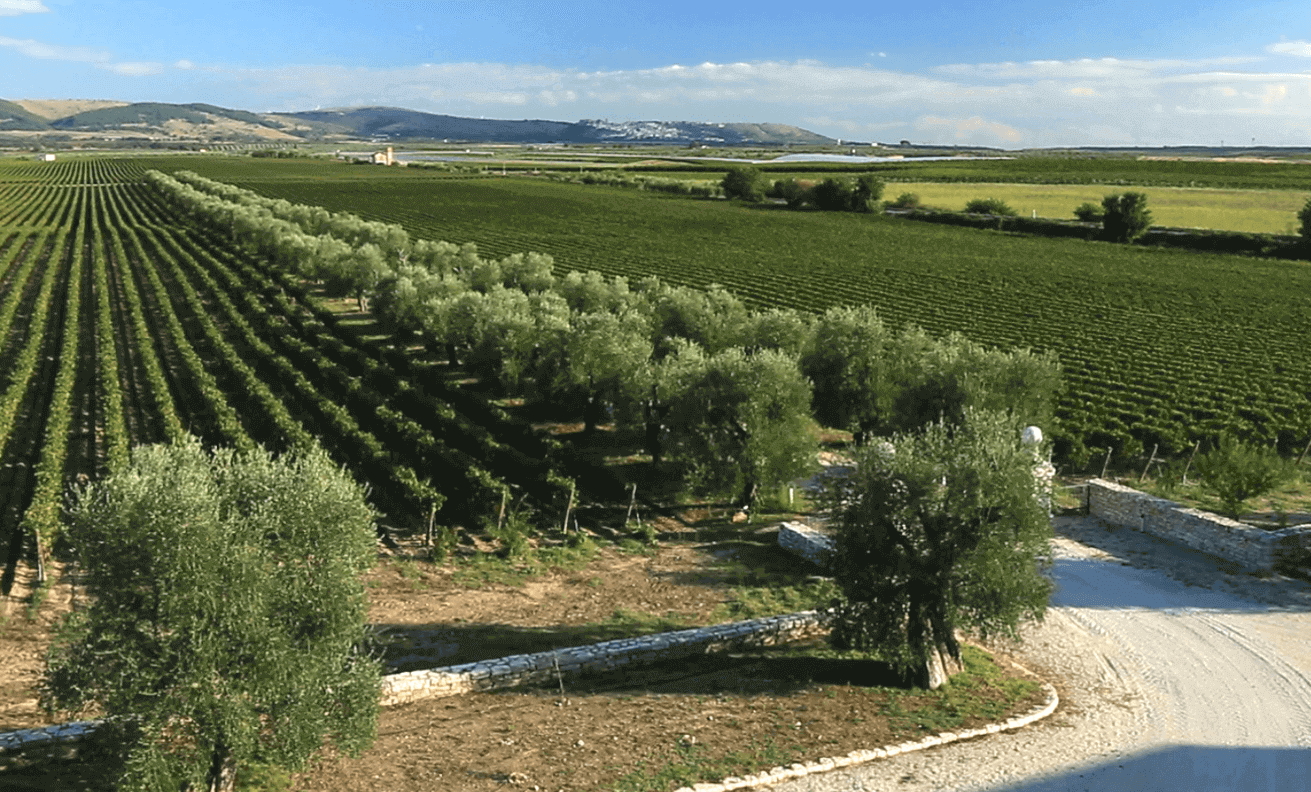 The Masseria Maìme winery in Alto Salento has been the headquarters of Tormaresca since 2009, 500 hectares, including 350 hectares of vineyards and, in between, ancient cereals and olive trees, surrounded by pine forests. Endless rows of vines as far as the eye can see, which seem to lose themselves in the sea. The Salento area extends between the Adriatic and Ionian Seas, the soils vary from rugged rocks to white sand, the climate is typically Mediterranean with mild winters and long, hot and dry summers, favoured by the immediate proximity to the Adriatic Sea. Chardonnay, Negoramaro, Primitivo and Cabernet Sauvignon are cultivated here.
In the midst of the vineyards stands the farmhouse, a historic masseria from the 17th century, used in the past for the wine making and as a storehouse for grain, outside the historic walls stands a small aristocratic chapel, San Pasquale in Maìme. The newly built Cantina Tormaresca, an ultra-modern wine cellar in the middle of the estate, is a low-profile building with flowing shapes that blend in easily with the surrounding countryside. 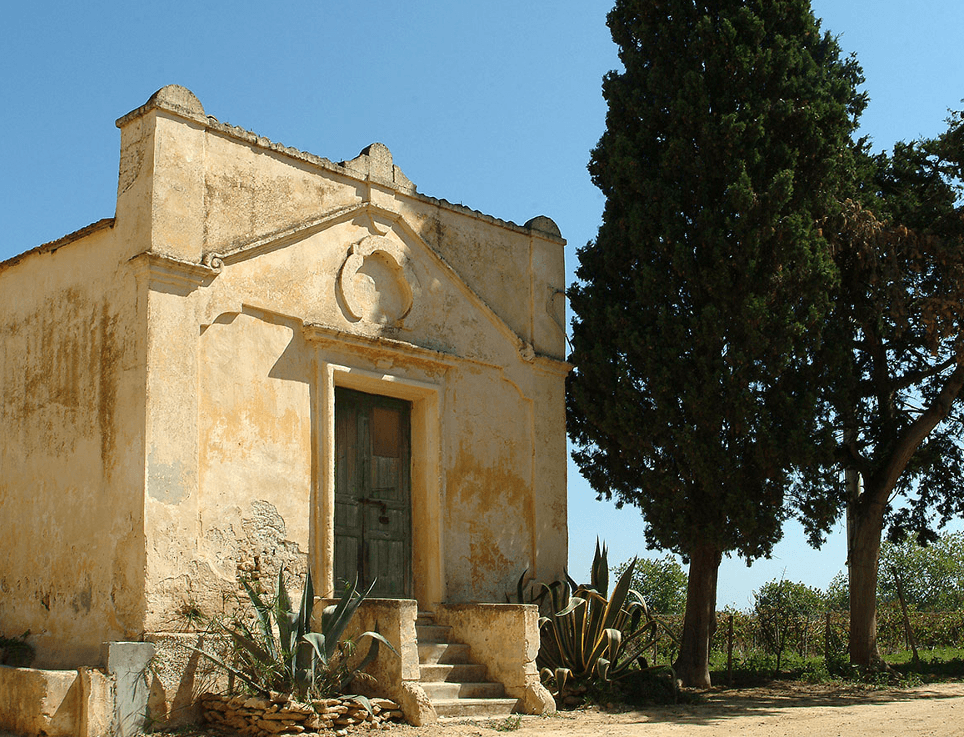 This website uses cookies, which are necessary for the technical operation of the website and are always set. Other cookies, which increase the usability of this website, serve for direct advertising or simplify interaction with other websites and social networks, will only be used with your consent. More information
Decline OK Configure