Primitivo - sounds like a simple red wine but it is complex. And the first grape variety to be harvested, hence the name Primitivo. Primo - First. No need to fear a simple, even boring red wine. Primitivo is different, is special, is southern Italian liveliness on a dry temper - and good for surprises.

Primitivo is different, is Italian life on dry mind.

At VINELLO you will find Primitivo from all regions: Primitivo di Manduria, Primitivo Puglia, Salento, Brindisi and more. We have dedicated a separate category to the popular Doppio Passo Primitivo.

In addition to Primitivo red wine, we also carry Primitivo rosé wine and organic Primitivo as well as packages.

The best and most popular Primitivo - our VINELLO Top 12 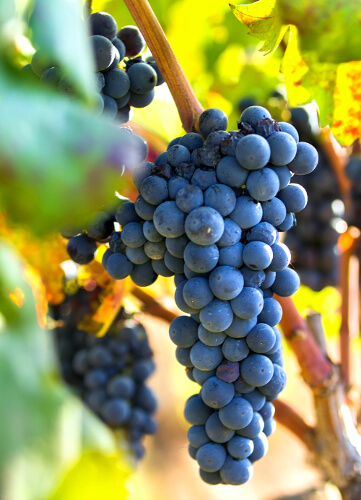 What is a Primitivo?

Primitivo is a red grape variety grown mainly in Italy, originally from Croatia.

The deep red of Primitivo is filled with an abundance of bold forest fruits, plums and cherries. In the velvety smooth body, the nose discovers notes of tobacco, cloves, chocolate, cinnamon, leather and cedar. Depending on the region, Primitivo wines are produced differently. In Salento, mainly residually sweet, in Manduria dry red wines are produced.

Most often, however, Primitivo is found as a dry red wine with relatively high sugar. The full Vino Primitivo has a lot of alcohol with 13-15%. Together with the soft body, this makes for a palate pleaser par excellence.

Among the Primitivo wines from Italy, the red wines from Puglia occupy a special position.

More precisely, it is the Primitivo wines that are produced around the city of Manduria. Favored by the mineral and stony clay soil, the Primitivo di Manduria vines grow extremely robust and magnificent. This is also due to the sunny and warm climate,

This results in precocious grapes with a high sugar content, which produce lush and fruity red wines.

These are well received. Then as now! So much so that the winemakers of northern Salento press Primitivo di Manduria under the DOC status.

Among them are defined permitted grape varieties, duration of ripening and maximum yields. 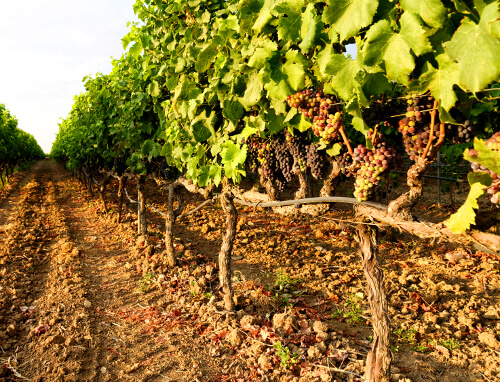 Rules for the production of a Primitivo di Manduria red wine

The catalog includes 8 articles. After fulfilling them, the red wine is allowed to adorn itself with the DOC status Primitivo di Manduria .

Primitivo - known from here to the New World

Unfazed by the sunny and southern climate, Primitivo blooms robustly and stately on the hills of Puglia. The barren and dry soil, around the Italian city of Manduria, particularly suits the grape variety. The growing cultivation of the grape variety in recent decades is the result of the great success of Zinfandel in America. Especially in the times of Prohibition, the red wine from Primitivo was popular contraband.

Primitivo wine eked out an existence in southern Italy for a long time as a table grape or blended wine in cuvées. The success of the grape variety in the USA was followed by great interest in its Italian counterpart. Today, high-quality red wines are produced from the Primitivo grape in both Italy and the USA. However, the grape variety does not originally come from either country. Primitivo, or Crljenak Kaštelanski, is native to the Croatian/Hungarian border region of Crljenak. Although a further branching of the origin is probable, but not proven.

The true origin of the Primitivo grape variety

Primitivo, Zinfandel, Crljenak Kaštelanski, Telanski - in all cases it is Tribidrag. The ancient variety from Croatia has always caused a lot of sensation.

Whether as Zinfandel in California, as Primitivo in Puglia or in the hands of many botanists, scientists and politicians.

Immerse yourself in the turbulent history of a grape variety that everyone wants a piece of. It begins in Italy, in Puglia, in a small garden of an amateur botanist.

A walk through the history of Primitivo

It was 1799 when Francesco Filippo Indellicati, priest of the parish of Gioia del Colle, was strolling through the local vineyard. A recreational botanist and agricultural scientist, Francesco noticed the precocious vines that stood out clearly. He recorded his discovery in the town archives under the name Primativo, the first to ripen. The grape variety quickly spread among local winegrowers in Puglia. Until around 1860, the name Primitivo was established. Since then, Primitivo developed into one of the most important red grape varieties in Italy.

Primitivo in the USA

Once traveled halfway around the globe, one discovers Zinfandel in California. This is confusingly similar to Primitivo. The American winemakers were convinced that this grape variety was native to the USA. Against the fact that the vine vitis vinifera is not native to the New World.

Others suspected that it was an immigrant from Hungary who had brought over 300 grape varieties to America. Among them was supposedly Primitivo from Italy. Evidence could only be provided by the historian Charles Sullivan. The variety came from the Schönbrunn wine collection.

Zinfandel from California and Primitivo from Apulia both made people happy with wine. In between, a botanically interested gentleman walked through Puglia's wineries again in 1967. He thus brought movement into the history of both grape varieties. It was Austin Goheen. A plant pathologist on behalf of the United States Department of Agriculture Research Service.

At first glance, the local Primitivo vines seemed very familiar to him. Without further ado, he sent a cutting of Primitivo to the University of California. After some time and research, Goheen recognized a strong similarity in morphology. Further, Wade Wolf, a prospective doctoral student, studied the molecular profile of both vines. He found that the profiles were identical.

The battle for the grapevine

Research now concluded that Primitivo and Zinfandel were identical. Thus, Italian winemakers began to market their wine in the U.S. as Zinfandel as well. This caused a nasty stir among American winemakers. in 1985, the Bureau of Alcohol, Tobacco and Firearms decided that Zinfandel should not be used as a synonym for Primitivo. Because of the poor evidence.

This changed in 1994, when DNA analyses dispelled all doubts - Primitivo and Zinfandel were henceforth considered identical.

The search for the true origin

For a long time, a Croatian origin of Primitivo was suspected. This is because Zaragese, derived from Zagreb, has always been known as a synonym for the grape variety.

The variety Plavac Mali, grown in Dalmatia, was considered a hot candidate. However, this was discarded by an analysis of isozymes. However, not before Croatian winemakers jumped on the wave of success of the grape variety. From then on, they sold Croatian wine under the name Zinfandel. The beginning of the second chapter of the struggle for Zinfandel.

Numerous samples of old Plavac Mali vines were examined, none provided an identical DNA profile. But then came the breakthrough. A vine of the Crljenak Kaštelanski variety, from Kaštel Novi in the north of Split. It completely matched the DNA profile of Zinfandel. The connection was confirmed by another vine namedTribidrag.

The oldest mention of the grape variety that we mostly know today as Primitivo was under the name Tribidrag. This autochthonous variety in Croatia has been known under this name since the early 15th century. The origin of this name is remarkable, since the Croatian word tribidraga comes from the Greek. It can be roughly translated as "precocious". Thus, the bridge between the origin in Dalmatia and the clergyman from Gioia del Colle.

Today Tribidrag can be found almost everywhere in the world. The main places of cultivation are still California and Puglia. And even if Primitivo is often considered exotic, the grape variety always finds a place.

Thus, there are vines in France, Israel, Croatia, Australia and even in Canada and Mexico. Who is surprised? Brings Tribidrag, Primitivo, Zinfandel or as the grape variety is also called, full fruit and pleasure in the glasses.

Order a strong piece of Italy. Our wide selection of Primitivo wine will inspire you. Also try a Zinfandel from sunny California, USA. Because sun makes taste and taste makes fun.

All this and much more is hidden in the ruby-red color of Primitivo. Cheap to buy, easy to order.

Briefly browsed online and quickly delivered to your home. Shipping to Germany or around the world. Enjoy the comfort of a vacation in Puglia - at VINELLO, your supplier of pleasure in red wine form. Or rosé wine.

Things to know about Primitivo
What grape is in Primitivo?
Primitivo, also known as Zinfandel and Crljenak Kaštelanski, is a red grape variety grown mainly in Puglia and California. The grape is primarily used to produce dry red wines. Since 1974, Primitivo from Puglia have been awarded the DOC Primitivo di Manduria seal. The seal indicates top quality The name Primitivo probably comes from Latin. The grape variety ripens very early and is therefore the first to be harvested.
Where does the name Primitivo come from?
Yes, the grape variety Primitivo is the basis for a dry wine.
Is Primitivo a dry wine?
Primitivo wine is made from the grape variety Primitivo.
What grape variety is Primitivo?
Strong, hearty, Primitivo. Red meat, roasts and dishes from the grill are suitable as partners to the full-bodied red wine. It also goes well with Asian cuisine and rustic vespers A Primitivo is served at 16-18° Celsius.
Food recommendation - what goes well with Primitivo red wine?
Close an open bottle of Primitivo tightly and put it in the refrigerator. In this way, depending on the level, the wine will keep for 3-5 days without loss.
At what temperature should Primitivo red wine be drunk?
Cool and dark. The complex aromas already show in the first year. Therefore, the wine does not need to be stored for a long time to achieve optimal drinking pleasure. Nevertheless, Primitivo keeps up to 5 years in cool, dark cellars. Before enjoying a cellar wine, it is advisable to bring the wine to the right temperature. The connoisseur says chambriere, the layman warm up. No matter how, it tastes best at the right temperature.
How long does an open bottle of Primitivo last?

How to store a Primitivo red wine?