Elisabetta Gepetti from Fattoria Le Pupille has always loved Tuscany, especially the Maremma. For centuries this coastal area on the Tyrrhenian Sea was an inhospitable marshland, but now, after drainage measures, tourism and agriculture dominate here, with viticulture in particular.

The woman in the vineyard and cellar

The Fattoria Le Pupille was founded at the end of the 18th century and changed hands several times, but it was in 1985 that Elisabetta Gepetti recognised her destiny and took over the family winery Le Pupille, in a sense re-founding it. She left the university behind and devoted herself to the vineyard and cellar. The Cabernet Sauvignon, replanted on some rows of Sangiovese, began to bear fruit. The support of the well-known oenologist Giacomo Tachis was much more than technical advice. The result is a project that has made the company a true pioneer of the Maremma. In 1982 the first "official" label of the company appeared, a Morellino Riserva 1978 vintage. 1987 saw the first production of Saffredi, the wine that made the excellence of the Maremma famous far beyond its borders. 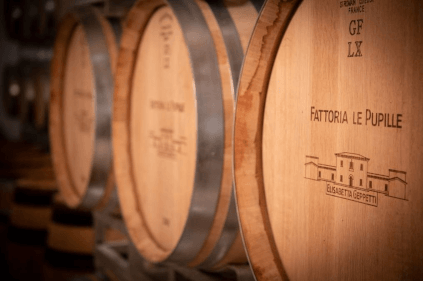 In 1996, the purchase of the Poggio Valente winery gave the company an even more important face. The map of the vineyards reflects the different phases in the creation of Le Pupille and the distances that separate one vineyard from another are also important. It can happen that you have to go up and down the hills, crossing woods and medieval villages, going through wheat and sunflower fields for a few kilometres before reaching the vineyards of Saffredi or Poggio Argentato.

The most important core of the estate is located near the village of Pereta, 25 hectares in all, now known as Vecchie Pupille, including the five hectares of vineyards dedicated to the estate's flagship - Saffredi. Pereta is situated halfway between Scansano and Magliano in Tuscany, two names which, even for laymen, mean the historical heart of the Maremma's viticulture. Near the village of Pereta, in addition to the Saffredi vineyard, there is also the Poggio Valente vineyard, which follows the gentle hill that rises 280 metres above sea level. Near Scansano, a 4-hectare plot of land is planted with white grapes, while outside Magliano a large vineyard of 20 hectares is set aside for the production of Morellino. 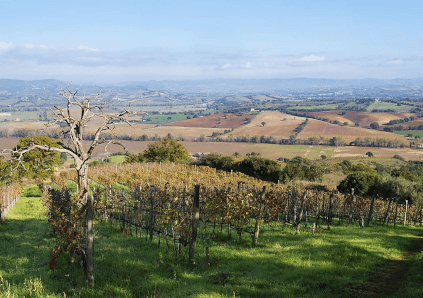 Fattoria Le Pupille today resembles a mosaic. Over the years, the original nucleus has been enriched with new vineyards, which have grown to 80 hectares of vines and are distributed like mosaic stones over the most suitable vineyards in the production area. Another 20 hectares are used for olive trees and then cereals and cork oaks alternate with willows, for a total of 420 hectares of land.

Since 2012, the oenologist Luca D'Attoma has been in charge of the vineyards and wine cellars. He is also called the Armani among oenologists for his class and striving for perfection.

Elisabetta Geppetti has successfully realised a heart's desire to produce great wines. For this she is called Signora del Morellino and ambassador of the Maremma. In 1992 she became the first female president of the newly founded Consortium Morellino di Scansano, a position she holds again today. Of her five children, the eldest daughter Clara is already active in the winery alongside her mother. In 2006 Elisabetta Geppetti was awarded the title of Wine Grower of the Year by "WeinGourmet" and "Der Feinschmecker".

Fattoria Le Pupille grows the following grape varieties, among others: